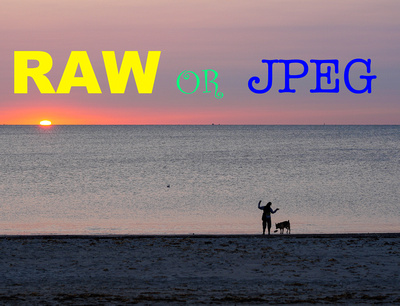 Hey Everyone! Hope you had a great week. This week I want to talk about the difference between shooting in RAW and JPEG and what I think about it.  In a few days I'm taking a photography trip to Boston Massachusetts in the US.  While there I'll be conducting an experiment on RAW vs. JPEG file format.  I'll shoot RAW+JPEG but I will only use the JPEG files and have the RAW's for Backup. Its backwards of what most people do (me included) but I thought I would give it a go.  I was listening to a Podcast and it was talking about how to get out of a slump and shooting in JPEG was one of the ways. Just shoot. So on this trip to Boston I'll only be posting JPEG shot images and see how it works out. Lets talk about RAW and JPEG files a bit.

RAW Files. Images shot in RAW is exactly as it sounds. It is the most amount of information (data) recorded by your sensor with no post processing done to it .  Its RAW data. And when we look at it on a computer it looks dull and doesn't pop at all.  We have to post process this image to get it looking like what we saw on the back of the camera on the display which is a JPEG. We can do a lot to these images in this format and is what is shot by professionals around the world .  It is the standard that most photographers use. Shooting in RAW. But it does have some disadvantages also. The files are larger and it take longer for your camera to write to the memory card you have in your camera. So if you're  shooting high action sports or wildlife this could be a disadvantage to shooting in RAW.  You have to post process this format if you want it to look anything like you have on the back of your camera. When you take a photo the image that you see on the display is a JPEG file which means that it has been compressed

and processed by the camera. For me a lot of the time I'm trying to get the final photo to look like it did on the back of the camera.  So isn't that unnecessary editing? RAW format is excellent for Portraits , Landscapes and any type of art  photography where post processing is a must.

JPEG's files. Images shot in JPEG are compressed files and have had some processing done to them that cannot be undone. This means that they are smaller files and what you get is what you get. You cannot back out of a JPEG and make it a RAW file. It doesn't work that way. These files are smaller and take up less room and can be processed by the camera and written to your memory card faster than RAW files.  This makes them great for Sports and Wildlife.  With JPEG's there is less editing .  And there is also less room to post process.  Although you still can process the images. When using JPEGs you can have camera profiles burnt in or cooked into your files.  Like film simulations or different effects can be "in camera" edited. But remember you can't undue what is done.

So why would you ever shoot in anything but RAW?  You have full control over everything.  Well I guess its in how you shoot and what you shoot and the style of shooting that you do. If I were doing professional work where I was getting paid I would definitely shoot in RAW with a JPEG backup. But if I don't plan to sell my photo's?  If I am doing fine art photography I think shooting in RAW is also a good idea.  But if your like me and don't sell or really do fine art photography.  I mainly do landscape and travel photography. Do I need to shoot in RAW.  It would be quicker and easier to shoot in JPEG and just lightly edit my photo's.  That's what the experiment is going to be about when I go to Boston.  To see if there is a big difference between shooting RAW and JPEG.  Or can I just shoot in JPEG and shoot in RAW when I need to? It doesn't have to be either/or but maybe and. To me its kind of like shooting in Manual all of the time because someone on the internet said that professional photographers shoot that way.  But if your like me and have been shooting

manual for most of my life I like shooting in an auto mode like Aperture Priority or Shutter Priority. When I started photography many moons ago there was no auto modes. Just manual. I know that if I don't see what I like that after years of shooting in manual just a couple of adjustments and I have what I want but 90% of the time the camera gets it right. Really the only time I shoot in Manual now is when my camera is on a tripod and I'm doing some sort of long exposure like a waterfall shot. So why can't I do this with RAW vs. JPEG? JPEG is like shooting in Auto and just go to RAW when I need to Like doing Astro Photography or long exposure when I'm on a tripod. And since I'm shooting RAW +JPEG anyway there is nothing to change. Anyway those are my thoughts about RAW vs. JPEG .  I'll let you know how the experiment went and if it changes the way I photograph things.

So get out and experiment with your photography. Don't be afraid to try something new. And until next week Get out and Shoot!