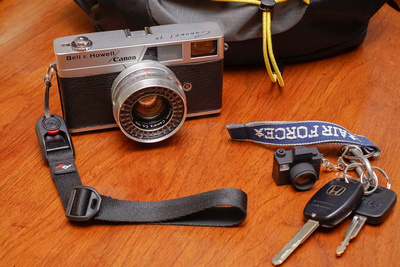 Bell & Howell /CannonHere is the new addition to my film cameras . 1961 Canon Canonet 19.

Hey Everyone! Hope you are doing great today! This week I want to talk about old camera tools that still work today with our newer cameras that have all the technical advantages.  These two tools will help you get your settings right quickly and focus quicker.  These tools were made many years ago, almost 100 years.  The first tool or rule was invented by the Kodak company.  When they first started making consumer cameras, they wanted the everyday man to be able to use the camera without fumbling with settings on the camera. They spent millions of dollars back then on research to figure out this rule.  It's called the "Sunny 16" rule.  It tells you what settings to set your camera on when it's sunny or when it's cloudy, and it works! All of the time it works!  The rule states if it's sunny outside, you set your f stop to f16.  You then set your shutter speed to the same number as your ISO.  So if it's a sunny day and you set your camera to f16 and have an ISO of 400 and set your shutter to 400, your exposure will be correct.  So how does this old rule help you?  If you are in a hurry to shoot something and you're shooting in manual, you can set your camera to the sunny 16 rule and, bang, exposure is set, no thinking.  Then you could adjust from there. If you're riding in a car and come up on some elk, if your

camera is already set, all you have to do is focus and shoot.  There are some rules for when it's slightly overcast: use F11; heavy overcast: F5.6; shadow: f4.  Everything else stays the same.  So you could see back in the day that this was very useful, especially if you didn't have a light meter, which most people didn't.  When else?  How about shooting the moon.  Nothing is more frustrating than trying to shoot the full moon and your shot is overexposed and you can't see any detail on the moon.  But if you use the sunny 16 rule and remember the moon is just a reflection of the sun, you should have perfect exposure.  Pretty neat for a 100-year-old rule or tool.

The next 100-year-old rule will also help you when focusing.  You say, well I have the newest Sony, Canon, Nikon, Fuji camera, and it focuses super

fast. And I would say, yes, it does in good light. But what about poor light?  Say you're shooting a wedding reception or a banquet of some sort, and the lights are turned down.  Your fancy camera (no matter what the make) will hunt and look for something to contrast against and then, depending on your aperture that you probably have set to 2.8, you will have a hard time getting anything in focus.  There is a rule or tool that is called Zone Focusing.  Everyone has seen it used before in photos that are famous by Ansel Adams.   This is where everything in the frame is in focus.  This is well before Photoshop where you can focus stack now and get the same result.  This was done during the time of manual focus lenses.  It deals with two things: depth of field and aperture.  Depth of field is the part of the photograph that is in focus.  Like I mentioned before, you have seen photographs where everything is in focus.  But you have also seen portraits where only the eyes are in focus.  The tip of the nose is out, and the ears and everything else is out of focus.  To do zone focusing, you have to know where that depth of field is. To do that, we must use a depth of field calculator.

They can be found anywhere. Just google "DOF calculator," and you'll get a bunch.  I have one on my phone.  You plug in the focal length of the lens you are using. I picked 35mm the fstop you're using. I picked 8 and it tells you where to set your lens at and then put it in manual. For me it was 5 meters or a little over 15 feet. So if you have an old lens that has all of the markings on it, you could just dial that into 15 feet or 5 meters.  Then everything from 2.5 meters to 162 meters will be in focus. If I don't have an older lens with the markings, I can find something that is about 15ish feet away, focus, and then put the lens in manual and shoot.  Everything 2.5 meters away and beyond will be in focus.  If I needed a fill flash, I could put that on and it would work great.  So if I am on the dance floor at a reception, I just have to make sure that the subject  2.5 meters away.  and shoot, shoot, shoot.  I can do it quickly because my camera will not have to focus.  Now the lens matters also and the size of the sensor.  The depth

So there you are, a couple of old tricks that can help your new camera work better.  So until next week Keep Shooting!