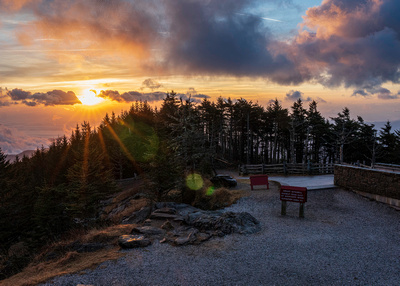 Hey Everyone! Hope you are doing well so far this New Year! Back in 2020, my photo buddy, Robert, and I went to the coast of North Carolina for a photo of the New Year.  We had a great time and it was a great start to the new year that actually turned out great considering that Covid started.  Speaking of Covid, we didn't do anything in 2021 because of it.  So this year we decided to make a go at it again.  So we went from sea level in 2020 to the highest peak east of the Mississippi in 2022.

Trip Planning: Trip Planning was pretty easy.  We had 3 or 4 ideas on places ranging from Virginia to South Carolina.  Once we decided on the location, my photo partner in crime booked the nearest hotel.  That was pretty much it.  It was a 4-hour drive, and he volunteered to drive. So I really didn't have anything to do but show up. Which is wesome!

31 December 2021: We left about 10:00 in the morning and started the long drive.  The conversation was lively as it always is.  We talked about

gear, new photo techniques, politics, almost anything.  I don't think there was a minute of silence the whole way there.  We stopped to get gas and made some sandwiches with stuff we brought with us.  We kept heading to the mountains.  Robert's brother in-law was going to meet us at some point.  He has a little Miata that he was driving and wanted to drive the curvy roads of the mountains.  We finally made it to our hotel in Marion, NC, and realized that we were still an hour away from Mount Mitchell.  So we dropped off a bag, got back into Robert's truck, and headed out.  The road up was very curvy and steep in places.  We finally made it onto the Blue Ridge Parkway and after a few tunnels, we were there.  When we got out it was cold, windy, and looked like it was going to rain.  The bags we dropped off at the hotel had our jackets in them.  Yikes!!!  We bundled up the best we could and headed to the top.  This was a short but steep climb, and we finally make it to the observation tower.  We took photos and scoped out where we were going to

shoot in the morning.  On the way down, we met Robert's brother in-law and we went back up to the top.  We then all headed out to get us something to eat.  Robert attached a GoPro to the Miata for footage of the trip down the mountain.  We found an excellent Mexican Restaurant in Marion and had a feast.  After that we headed to the hotel to get ready for the New Year's shoot.

1 January 2022: We started early and left the hotel at 5:30. For some reason we thought that sunrise was around 7:00, but it wasn't until almost 7:30.  We figured that the drive would take longer because it was dark, and it was.  We arrived at Mount Mitchell at 6:30 and didn't know if the gates were going to be open.  They normally don't open until 7:00, but they were open so we drove to the top parking lot.  It was 6:30, dark, rainy, and cold. The temp was 39 degrees, and the wind was howling.  We were sitting in the truck and it was shaking in the wind.  And we were the only ones there.  After a while, another car

and a truck showed up, but it was still dark and windy.  We saw a lone figure heading up with a hoodie pulled over their head, so we decided to get bundled up and head up.  I ventured not to take my tripod because it was so windy it would just get blown around, but Robert brought his.  When we finally made it up to the top, there were 5 or 6 people there watching the sunrise on the new year. The wind was howling and the clouds were streaming by.  The lone figure we saw was a smallish young lady who was standing on a bench with her cell phone being almost blown off the bench at any given time.  It was a pure pleasure to be with these people watching a new year start. There were these big columns that I sat my camera on to steady and it worked out okay.  Robert wedged his tripod through the rungs of the railings and it kept steady.  We oohed and awed at the scene for about 30 minutes.  I turned around and a young man was on one knee proposing to his gal.  It was an honor to be a witness to this at this place and time.  She said yes.  We got some great photos and video and really enjoyed the new New Year's tradition.  On the 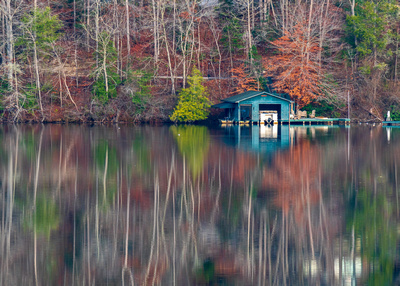 way down, we stopped at a couple of places along the way and got some shots.  We stopped by the hotel and, score, they were still serving breakfast, so we sat down and had a big breakfast before heading home.  Our journey home was much like the one there, filled with conversation on many topics.  But the most important topics were the next adventures we have planned.  Some small and one large adventure planned for the future.  We'll talk about these later.

So until next week, start making more photo traditions and get outside!