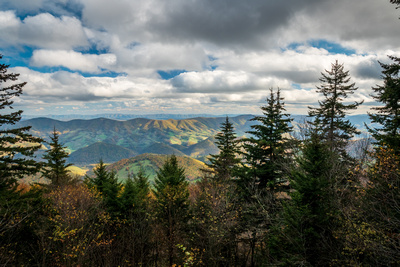 Hey Everyone! Hope Everybody is doing great.  This week I wanted to tell you about my photography club's trip we took to West Virginia for a fall colors workshop.  The GAPC (Goldsboro Area Photography Club) is a very active club in North Carolina. We have monthly workshops and monthly meetings. The meetings have been Zoom meetings since the pandemic started, and the workshops are held with safety for social distancing in full force.  We usually hold a week-long trip for fall colors.  Usually, it's to the NC mountains to photograph waterfalls and wildlife.  We have once gone to Washington DC and took the train to get there.  We have previously gone to West Virginia.  Covid killed all our trips in 2020, so when I heard that we were having our annual Fall Colors workshop, it really got me excited.  I was in a photographic funk, and the most I did in photography was this blog.  This year's trip was not a week long.  We only went for five days and four nights, and of course two of the days were really travel days. But we had it jam-packed with things to do as we usually do.  They don't call it a workshop for nothing.  We work!  But we really have a good time doing it.  To me it's almost like old folks summer camp! LOL We have a couple of folks that set up our itinerary and make the arrangements for our lodging.  We usually use some sort of Air B&B house or cabin that will house all of us,

and when you split the cost it's not much per night.  We also split the gas money and any food or drink that we buy for the house.  For example, if the lodging was $1,000 for the week, split up by 10 people that's only $100 for a week of lodging.  So at the end of the week, depending on how many people are going, you might only spend a few hundred dollars on gas and the house, and we usually eat out unless we order in a pizza or something.  Of course we split the house up into boy and girl rooms and bathrooms and try to accommodate everyone's needs. So here goes a day-by-day account of our trip.

Day 1 - Early start 4:30ish and we drove to Mabry Mill in Virginia, where we took photos of the Mill and had breakfast in the restaurant.  It was very chilly and I may have seen some frost on the ground. The breakfast was awesome, but there was quite a wait.  The next stop was the New River Gorge National Park Visitor Center.  We went to the center and took photos of the bridge.  We tool the road down to the old bridge and around to the other side.  We stopped and took photos at the bridge.  After that we headed to our first house and met a member of our team that was meeting us there.  Our house was in Fayetteville, West Virginia.  It was a nice house with plenty of room for us.  We went to a local bar and grill for supper (I can't remember the name).  Then we headed to Beauty Mountain to take sunset photos.  It's a really nice place for sunset

CurvesShot from Turkey Spur in the New River Gorge National Park. The curves of the Railroad Track the New River and the Clouds caught my eye.

photos and kind of off the beaten path, literally on a dirt road.  After that we headed to the house to edit photos and get ready for the next day.

Day 2 - This may have been our busiest day.  First we went to Grand View, which is in the NRG National Park after making a drive through the local McDonald's.  There we waited for the sun to rise over a foggy scene.  There was a little jockeying around for position with other photographers that were there.  After getting our shots there, we went to Turkey Spur, also in the park.  Here you had to climb some stairs to get

you pretty high above the New River.  We had some good shots here also.  Next stop was Sandstone Falls and it was about a 30 to 45-minute ride to get there, and it was also part of the National Park.  We spread out and all seemed to get different shots here where we spent a few hours.  Then it was time for lunch.  We went to a local eatery in, I believe, Hinson, West Virginia.  Very good food!  Or either we were just hungry.  Our next stop was to the town of Thurman.  This was another 30 to 45 minute ride back toward our house.  This is a deserted town.  It may have a population of five.  We walked around there for about an hour.  On our way out we stopped at a beautiful waterfall -- I don't even know if it had a name -- and it was a steep climb down but well worth it for the photos we got. We had planned a sunset shot, but by this time we were worn out.

Thurman Road FallsDon't know the name of the this falls but it was on the road to Thurman which is located in the New River Gorge National Park.

We went back to our house and ordered a pizza from a local pizza place.  May have been the best pizza I ever had or I was just really hungry, but it was good.

Day 3 - This day we were to move out of the house we were in and go to Davis, WV, which is in the northern part of the state.  So we got up early, cleaned up the house, and headed to a biscuit breakfast place where we did another drive through. Really good. I had the breakfast burrito. We then headed to Babcock State Park to take photos of the Glades Creek Mill.  This is a very popular spot.  Two years ago when we

went there wasn't hardly anyone there, but this year after Covid it was packed with folks. Photographers jockeying for position to take the photo. Luckily I had been there before and had some good photos, so I was able to take my time and get the shots I wanted away from the crowd. The colors were wonderful there.  We then went to an overlook and got some great color shots also. We then started our trip north to Davis, and we stoped at Hawks Nest State Park.  They had a great overlook, and we had lunch at a restaurant on site. Our next destination was Dolly Sods. We had visited this spot on our last visit, and it was pretty awesome.  There is a 10-mile dirt road that takes you to the top.  As we got closer the clouds increased and the rain started. The top of the mountain was under clouds, so we decided on the way up to stop and turn

Seneca RockCheck out the people on the top of the rock!

around and just forget about that shoot.  We headed to the house and got settled in and made sandwiches for supper.

Day 4 - It rained all night, and it was still raining when we got up.  So we decided to go out for a sit-down breakfast and see how the weather was going to be.  It was raining and 40 degrees, not a great combo.  After breakfast we decided to go back to the house and maybe get out in the afternoon.  The weather was supposed to clear.  We went to the local state park, Blackwater Falls State Park, and it was packed with people.  We couldn't even park, so we decided to go to Seneca Rocks.  We went there on our previous trip and there was no one there and it was a so-so shot.  When we went this year, the place was packed and the colors were popping!  We stayed there a little and

went to Spruce Knob, the highest point in West Virginia.  The views were spectacular, but it was cold and very windy.  We stayed for maybe an hour and headed back to Blackwater Falls to catch a sunset.  It was a race to get there before the sun set, and as we rounded the bend we saw a big white tent.  Someone was having a wedding at our sunset spot.  So we turned around and started back to the cabin where there were lots of deer grazing. So we got some photos of them and headed to the house.

Day 5 - Our last day.  We woke up and cleaned the house and headed to Blackwater Falls to take photos of the waterfall.  We timed it right because there was no one there.  We got out and pretty much had the falls to ourself except for a guy and a drone that was annoying, but he left.  After our time here at Blackwater Falls, we went to a local place to have breakfast and it was great! After that big meal we headed home to Goldsboro, a six-hour drive.

All in all it was a great trip and I wish it had lasted longer. Can't wait until next year's trip.  So until next week, get out and explore and keep shooting!