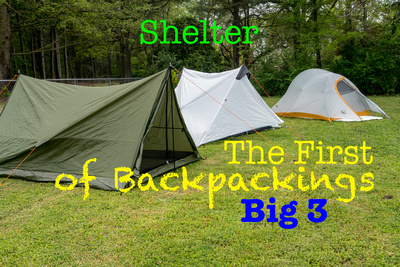 Hey Everyone! Hope today fines you in good health and happy! This week I want to talk about Backpacking and the Big Three!  What is the big three you say? The big three in backpacking is your Shelter, your Sleep System, and your Backpack.  These three things will be the most costly and probably the heaviest of the things you will cary.  To me they are gear that you shouldn't skimp on. My old saying still rings true "Buy Nice or Buy Twice"  All of the other stuff that you will have in your backpack will be fairly inexpensive or you may already have. These things will be specific to Backpacking .  You don't want to use a car camping sleeping bag you got for 40 bucks at Walmart to go backpacking with. While it may be great for car camping it will be too heavy and bulky to cary on a backpacking trip. In backpacking a true hard fact exist " Ounces equal Pounds and Pounds equal Pain!"  So weight is not the most important thing when picking out something to bring backpacking its high on the list. A cheap tent you get at Costco that weighs 7 lbs is going to be heavy on your back very quickly.  Durability is also something to take into consideration when picking out your Big Three.

Your Shelter should be the first thing on this list that you acquire.  I know a lot of people say the pack but 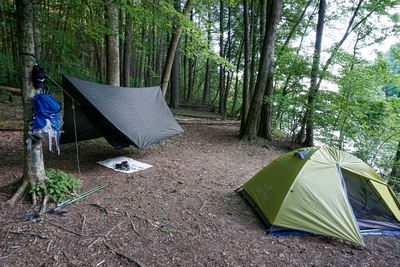 you don't know how large a pack until you get your shelter and sleep system.  What type of shelter are you going to use?  There are two camps on this to me. Tents or Hammocks. Tents are the more traditional choice and they cover anything from a Tarp Tent to a stand alone tent.  They can be set up almost anywhere.  There are Tents that use your trekking poles for the tent poles to save weight and there are stand alone tents that pop into shape when you insert the special poles that come with them.  Then there are Hammock systems.  I say systems because these tend to be more complicated to set up and you do need trees to use them.  Hammocks themselves are light weight but you also need a tarp to cover you incase it rains and you need extra insulation underneath the hammock to prevent heat loss even in summer.  My favorite is a Hammock system but its not right for all backpacking situations. If your in the desert where there are not trees. Or if your in the mountains above the tree line you have no where to put your hammock 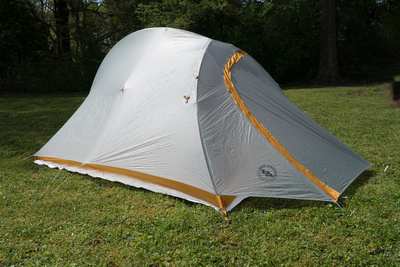 up at. I think they sleep better than tents but maybe I haven't got the right sleep pad yet.  I actually use either or depending on where I go backpacking. If your getting a tent which will probably be the safest bet for a beginner.  I would find one that is a one or two person tent. Don't be fooled by the two person option you'll have a hard time having another person in the tent because it will be very cramped . You really need to like the second person. I would look for one that is 2 lbs or lighter.  The lighter you go the more expensive it will be. The material makes a difference also. Most tents are made out of Silnylon. This is nylon that has been impregnated with silicone to make it water proof. Then there is Dyneema fabric that is as strong as steel , lightweight and waterproof.  Tents made out of Dyneema are the most expensive ones and the lightest. There are lots of options in the 2 lb range.  I personally have a few tents that meet this criteria.  I have a Big Agnes Fly Creek 2 UL that weighs in at around 2 lbs. Its a semi free standing tent that means you do have to use some stakes to make it stand up.  This tent was a standard quite a few years ago for through hikers. They still make versions of this tent at about 400 dollars .  I also have some cheaper 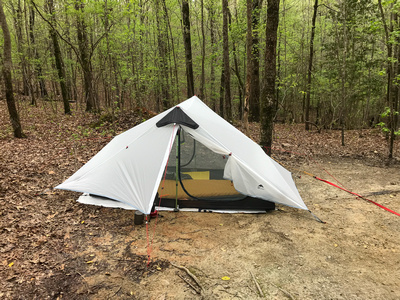 options.  I got a backpacking tent that uses your trekking poles for tent poles off of amazon. The River Country Trekker 2 tent comes in at 2.8 lbs.  You have to stake this tent out and it takes some practice to get it down. It cost 49 dollars.  Its made of a material that feels like a plastic tarp you get from walmart. Its like the old pup tents that I used when I was in Scouts.  You crawl in through the front.  Its warm in the summer because it doesn't have much ventilation but it will work if your trying to save money.  I have one that's kind of in the middle its a Chineese tent that I got that uses trekking poles and its pretty roomy. I'd day it weighs about like the River trekking tent but its much larger and has better ventilation. Its called 3F Lanshan 2 tent and I got it off of

Alliexpress the Chinesse version of Amazon. There are lots of options out there and you could spend up to 800 dollars on a good backpacking tent. This is a big purchase so I would try some tents out if you can.  If you can borrow someones tent great.  Go to REI they usually have some tents set up to look at and maybe try out. So my advice would be when getting your first backpacking tent  is to get a middle of the road one for a couple of hundred dollars .  If you decide you don't like backpacking you can still use it to car camp with. 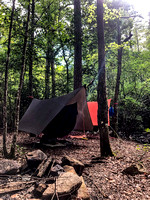 Hammocks are harder to pick out.  Most of the hammock systems that can be bought are made by garage companies.  These are companies that may work out of their garage or small business.  These are handmade items and can usually be customized to you if you ask.  The quality on theses items is superior to anything you would buy in a big store.  I use these companies as much as I can.  The hammock community is almost cult like when they start to talk about hammocks, gear and gadgets to use on your hammock.  There are all shapes and sizes with burnets like a tent to just a hammock swinging in the wind. If you think picking out a tent was hard doing so with a hammock is even harder.  You can mix and match hammocks, Tarps, Under quilts, suspension systems with 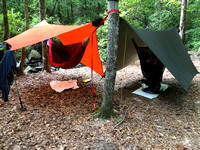 different companies to make your system special to you. Or you can do like I did and make your own.  My first hammock was bought from a garage company named "Butt in a Sling" hammocks.  I bought a hammock and suspension from them and got a tarp off of Amazon made for Hammock camping.  After using this a few times I decided to make my own and I went down the rabbit hole of design and making my system just for me.  You may have seen previous blogs talking about my home made hammocks and systems. I'm thinking and designing one in  my head now.  I would watch a lot of you tube videos  and read the book " The Ultimate Hang " by 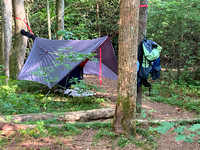 Derek Hansen .  He also has a book "The Ultimate Hang 2" Which is an updated version  with some DIY stuff in it. Either book is Fantastic and shows the do's and don't to Hammock Camping. Hammocks are made out of Nylon and are lightweight in their self.  But a Hammock system , (Hammock, Tarp, Stakes, suspension system, under quilt) are not as light weight when put all together.  I would say on a average that a Hammock system is heaver than a tent system.  But I would also say that it is more comfortable than a tent system .  Especially if you are up in years as I seem to be getting. LOL

As you can see this is a big decision and has many options . Do the research, watch videos, read the recommendations, ask friends and go and try out if you can before you make your decision. Next week I'll talk about my #2 of the Big Three the Sleep System. You can check out my gear by following this link Lighter Pack. You can see my gear load out and how much it weighs between tent and hammock and summer and winter by clicking on the list on the left. So until then be safe and get outside!