What I Don't Miss Anymore! 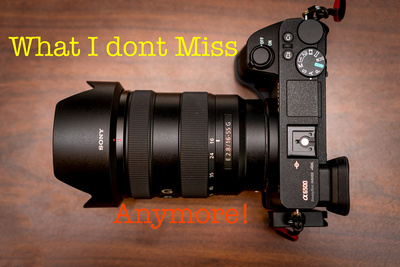 Hey Everyone! Hope everyone has had a great week!  This week I want to talk about something new in my bag.  Something I have been missing ever since I switched from full frame and went to crop senor cameras.  I did not miss the image quality or even the dynamic range that full frames claim to have.  But I did miss one thing.  When I was shooting Full Frame cameras of course I was shooting full frame glass and very good lenses to boot.  I had two out of the big three for Nikon.  I had the 70-200 f2.8 and the 24-70 f2.8.  Let me say I just loved these lenses.  Although they did weigh a ton the image quality sharpness was outstanding!.  I recently got on to Light Room and did a search for the most used focal range and the 24-70 by far has the most photo's taken.  Whether I was using a crop sensor or not .   This focal range was the most used and I knew that but wanted to see the numbers.

When I first got into the crop sensor sized camera's I like everyone else just had the kit lens.  I quickly

Finally about a year and a half ago Sony announced a 16-55mm f2.8 lens was coming .  I got a little excited until I saw the price and it cost more than my camera did.  They also came out with a longer zoom a 70-350 variable zoom lens which I got at a lower price.  This was a fantastic lens and I could only imagine how the one I wanted was.  So I stuck with the kit I had for another year.  I only buy one big item a year if I need to in camera gear whether its upgrading older equipment or something new.  This year I finally bit the bullet and invested in the 16-55 f2.8 lens.  And invest is the right word.  Its a very expensive lens but if I remember right I paid about the same price for my Nikon full frame but it was 10 years ago.  There was another contender by Tamron a 17-70mm f2.8.  But all of the reviews talked about how the image quality wasn't quite as good as the Sony and that's why I was upgrading in the first place.  It almost half the price of the Sony but quality won out and I got the Sony.  The lens is still new to me but so far I love it .  The Images are sharp and crisp!  It feels like a quality lens and it is not as large as the Tamron.  Size was a big factor when I went from full frame to crop sensor size.  So all around I am happy with my purchase and my kit is about as good as it gets as far as I am concerned.  I am a 99% photography only shooter with almost no video. A rarity these days.

So until next weeks discussion grab your kit and get outside and shoot!