The Myth About Always Shoot at 100 ISO! 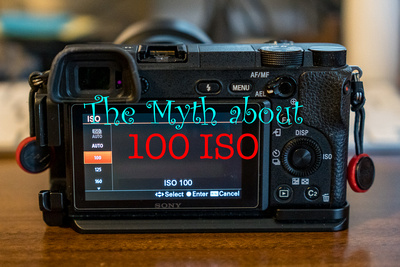 Hey Everybody! Hope this week has been fantastic for you!  This week I want to talk about ISO settings on your camera. One of the big three of Shutter speed, Aperture and ISO. The ISO is how sensitive your sensor is to light.  The Higher the number the higher the sensitivity of your sensor.  But with that sensitivity also come noise.  So the higher the ISO the more noise.  Now back in the film days you used to buy your film at ASA 100 or 400 and it worked the same way as ISO does but you couldn't adjust on the fly like you can with digital it was set in stone to what the film was.  But now this is a movable number from frame to frame if you want to and it can be adjusted like Shutter speed and Aperture.  When digital first came out noise was a problem on even the most expensive camera's.  And you didn't move the ISO off of the lowest number unless you had to.  If you did you got noise in the dark

portions of your photo. But with all of the technical advances in sensor technology that isn't the case any more and this number can be adjusted like the other parts of your camera.  Nowadays its no problem putting your camera ISO at 6400 and shooting with no noticeable effects. That's 6 stops of light you have to play with.  So what are some of the situations that you can adjust your ISO.  I'm going to use some landscape situations that this would come in handy.

Waterfalls- In shooting water falls getting the water to look right is the most important part.  So first I would get my Shutter speed in the ball park to get the water looking like I want it.  Then I would set my Aperture to get what I wanted in focus.  But if I have a Polarizer and a ND filter on the seen could be 2 to 3 stops too dark at 100 ISO.  But if I move my ISO between 400 and 600 ISO I can bring that exposure back to the normal range.  Now I could lighten the shadows in post production but that could bring in noisy grain but if I get it right in camera by adjusting the ISO that will make my photo look better in post production and my finial photo will look more crisp.

Windy Landscapes-  This is when the leaves on the trees are moving and I want them to be nice and still and crisp.  So I would first set my Aperture to set the part of the scene that I want in focus.  Then I would set the Shutter speed to the speed that will make my leaves nice and crisp. And if my ISO is at 100 and the scene is too dark because of the higher shutter speed I can up my ISO until the exposure is back and like above I

Newer camera's no matter what brand can handle the increase in ISO.  A good thing to do is test your camera.  You can easily do this by setting your camera on a tripod and shoot many photographs of the same scene using different ISO's and you can see where the highest ISO is that you like or can make a difference in your photography.  Where you feel comfortable at.  That threshold might be different for different cameras or different people with the same camera. Its all very personal.  For me and my main camera its about 6400 ISO.  For just run and gun shooting I usually shoot on Aperture Priority and  set my ISO to Auto and put a limit to 6400.  Anywhere between 100 and 6400 will be fine for me.  When I'm on a tripod I usually shoot in Manual mode and manually move my ISO.

So that's my soap box speech on 100 ISO.  So until next week get out and shoot.  If you have any questions please put them in the comments and I'll get back to you as soon as I can.