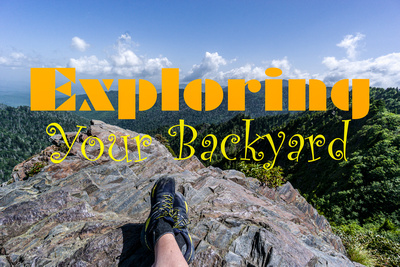 Hey Everyone! I hope today finds you healthy and safe.  Today I want to talk about Exploring.  I think exploring is embedded into us as humans. From the beginning of the written word, tales of exploring have been told. From traveling the oceans to "head west young man" to "one step for man, one giant leap for mankind" when we went to the moon.  But now all we seem to do is explore the TV set or on the internet looking for the next best thing.  I am no stranger to TV exploring and am trying to get out of it. But it isn't easy. Today we get used to being in our routine with our nose to the grindstone to make that buck.  This year in my photo project I have pledged my year into exploring the national forests in North Carolina.  A year might not be long enough.  I love to explore and see new things.  When I see new things, my creative juices start to flow and I can really take some good photographs. But you don't have to take long exotic trips to explore.  I'm sure with a little research and a relatively short drive, you can be somewhere that you have never been before.

Exploring new things doesn't necessarily mean looking for forests or hilltops that I like to go to.  It could be a new town or place you haven't been to before and learning about the history of it.  Or it could be taking a walk and seeing the new stuff all around you.  If you're into history, there are usually plenty of historical things you can see in any city.

Learn the culture of the town and why it became a town. Maybe there is historic battlegrounds or settlements around the town. Maybe, if you're a foodie and love food, you could try out local restaurants in the towns you're visiting.  It could be a BBQ joint or diner that serves fantastic food that you would have never found if it wasn't for exploring.  I call these little day trips, exploring your backyard seeing what's in a day's drive from where you live. For example, from where I live, in a day's drive I can see the mountains, the ocean, civil war battlefields, revolutionary war battlefields, slave plantations, cotton fields, rivers, lakes, wildlife preserves, national forests, national parks, state parks, museums, cities, and small towns.  And that's just what I could think of off the top of my head. So when someone says that they have nothing to do or nowhere to go around them, they haven't looked.  Last year, during the virus and all of the shutdowns I still managed to visit all of the state parks in North Carolina. So it's possible. I'm a planner, so I like to look up where I'm going to see what I can find on the web, like major attractions, places to eat, local history, and what kinds of photos other people have taken while they were there.  This can all be done with Google searches.

Exploring far-off places can be fun too, but to be honest I haven't done as much of this as I would like to. I haven't done a lot of traveling two or more states away from mine, mostly because of time constraints and having to have a real job to pay for everything. I just don't have the vacation time that I would need to explore the way I want to. But I do have friends that have that kind of time, and they plan trips to other countries and across our nation to do some exploring. If you have the time, this would be a way to go also. I know I would if I had the time. You can usually find a plane ticket on sale, especially if you book it in advance. I once went to Washington DC and took a train,

and it was pretty awesome to explore the city on foot and by the mass transit system.  It really took me out of my comfort zone which was awesome! But if you can't do any of the long-distance travel, don't stop exploring! Explore your backyard like I do and take day trips or overnighters to explore the wonders of the world. Don't just watch it on TV.  It's only a car ride away.

So until next week, please stay safe and get outside and explore around you!