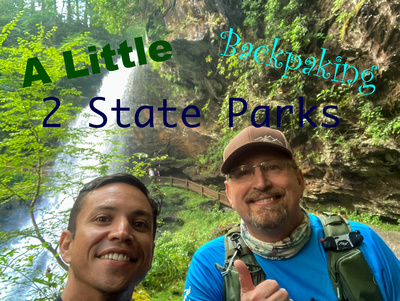 Hey everyone! Hope everyone is healthy and safe. Last weekend my son and I took a trip to the mountains for a little backpacking and to visit some waterfalls. While out, we visited two North Carolina State Parks, Gorges State Park, which is the farthest from our house, and Crowders Mountain State Park. The main theme for the trip was people and crowds. It was Labor Day, one of the busiest weekends of the year.  And with the COVID virus keeping people home and hungry to get out, the crowds were heavy. Both parks were 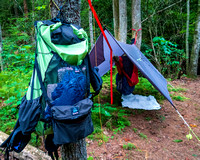 managed very well, especially Gorges. We had a young female ranger who we came in contact with throughout the weekend, and she was professional, courteous, and informative. Very professional! We weren't in Crowders Mountain long enough to come into contact with many rangers, and they all seemed to be busy directing traffic.

We left the house in Eastern North Carolina at 7:00 in the morning for a six-hour drive to Gorges. We left on a Friday and the traffic wasn't too bad. We arrived at Gorges and went to the Visitors' Center, which was closed. I

would like to come back when it is open because it is a beautiful, very modern-looking building with a waterfall coming down one of the walls. We got back to the parking lot at the trail head and hiked into a primitive campground. It was only a 3/4 mile hike and very manageable. My son and I have taken backpacking trips in the past where we hiked 10 miles or more in, but I was healthier then. I'm trying to get back into hiking shape. OFG is what I call myself, "Old Fat Guy."  We set up our campsite, which had a small creek just behind us and a small lake nearby. We used hammocks to sleep in which are lightweight, but more importantly, they are comfortable. After setting up, we decided to hike to Rainbow Falls, which is a 1.5-mile hike to get to. The trail is 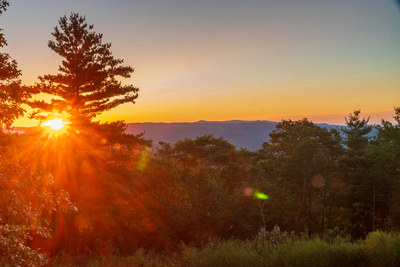 ranked by the park as a strenuous hike, and for a non-hiker, I would say that is accurate. My son, who works at a job where he's on his feet all day and probably puts in 25,000 steps a day, thought it was a breeze. I, however, who sit for most of the day and am out of shape, thought it was a good strenuous hike. It was a nice small waterfall, and we had a good time photographing and hanging out there. After that we hiked back and chilled out at camp, cooked dinner, and had a good night's sleep. 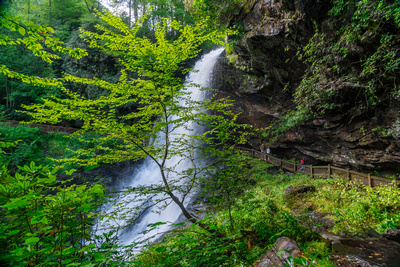 Saturday we woke up, and I had figured out that White Water Falls and Dry Falls weren't too far a way. So we hiked out after some coffee and drove to Dry Falls. This is a waterfall that you can walk behind and mostly stay dry.  This was my son's first visit, and he had a blast going behind and filming the falls.  We saw Bridal Veil falls on the way.  Then we traveled to White Water Falls to see the largest waterfall in North Carolina. After that we decided to travel to Brevard and get us some lunch and then went to a local park to eat. We headed back to the campsite to relax a little, and when we got there about 2:00 the park was closed. We told the ranger that we already had our stuff at a campsite, and she told us to come back in an hour. So we went to the local country store and hung out, ate ice cream, and looked at all of the traffic. And there was a lot of traffic. After an hour, just like the ranger had said, the park was back open and we got into the park and hiked back to our site, slid into our hammocks, and took a good nap. We 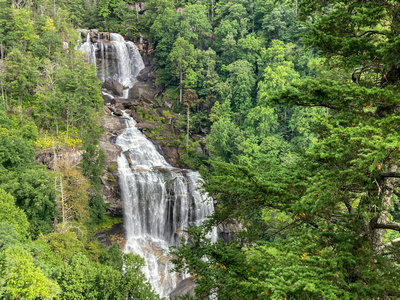 decided to get up early the next morning and head to Crowders Mountain State Park.

I really slept good that night, even though the ranger had told us of a momma bear and four cubs in the area! We got up early, packed up in the dark, and hiked out under the light of a headlight. We got to the car and went to the Visitors Center to take photos of the sunrise from the observation deck. We then headed out for a 2.5-hour drive to Crowders Mountain.  But first we stopped at the country store and got ourselves a breakfast sandwich (sausage, egg, and cheese biscuit ). Best Biscuit Ever! When we arrived at Crowders Mountain, I had my son pull over so I could get a photo of the welcome sign. We had 15 or more cars pass us as I took the photo. We thought maybe there was some type of event happening since there were so many people. There were two 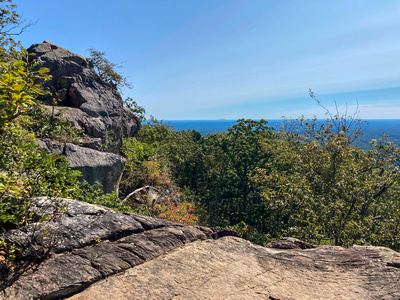 parking lots that were full and an overflow parking lot. We got lucky and slipped into a spot. Having never been to the park before, we just followed the crowd into the park to the Visitors Center that was closed. We hiked to a fork in the trail with two trails that go to mountain peaks. We took the shorter of the two, the Pinnacle Trail. It was a four-mile hike to the top and back, and I do mean up to the top. But if you look closely you can see the Charlotte, North Carolina skyline. After we made it back, it was a ride home.

Overall it was a great trip, and we had a ball and can't wait till the next trip, which is soon! I've got 29 of the 34 state parks visited this year, so I've got 5 to go before I reach my goal of visiting all of the North Carolina state parks in one year. We got to see some wildlife too, from a heard of buffalo, deer, snakes, and I even got to see a white squirrel. So until next time stay safe and get out and shoot!