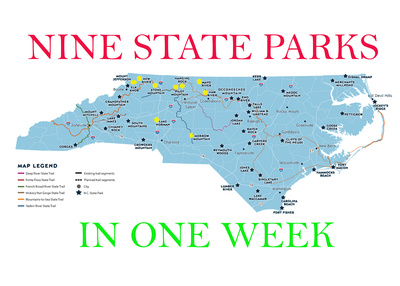 Hey Everyone! I hope everyone is healthy and safe today! This week's blog is about a trip I took a few weeks ago to get to as many state parks as I could in one week. I have a personal project to visit all of the state parks in North Carolina in one year. I have visited a lot of them already, but I wanted to visit all of them in one calendar year. There are 34 state parks and 7 recreation areas that I had planned to visit on weekend trips.  Shouldn't be a problem until Covid-19 showed up and shut down the parks for a few months. Well actually here in North Carolina everything shut down for a couple of months and some stuff is still shut down.  At

my work all vacations were canceled, like we would have somewhere to go, so I had some extra vacation. So when the parks opened back up for camping, I configured a week-long camping trip that would take me to 10 state parks to make up for the ones that I missed during the lockdown. My wife, Forrest, and myself took our teardrop trailer for our trip and had four different camping spots reserved.

The first leg of our trip we headed out "on time," which never happens.  We drove to Haw River State Park for our first state park. There we took a lovely walk around the lake and had lunch there. After lunch we went to Mayo River State Park where we actually did the same thing hiking around a lake.  Of course we were taking photos during the whole time. Our last stop was to Hanging Rock State Park where we were scheduled to be for two nights camping. While there we hiked and enjoyed ourselves camping. I got to use a new solar panel kit to try to keep my teardrop battery charged and it worked well. We did not have electric power at this campsite. 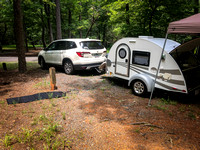 The second leg of our trip we left on time again, a really great job to my wife. When we headed out we went to Pilot Mountain State Park where we went to the observation deck and had great views. After that we went to Stone Mountain State Park where we had lunch and hiked to a historic farm site at the base of Stone Mountain. We then took off to New River State Park the furthest point of our trip. This is one of the parks that I haven't visited yet, and I was really surprised at how nice the campground was and the park in general. The trails were nice and well-maintained. We stayed there for two nights where we had an electric hookup and were able to enjoy the A/C in our little trailer, although this was the coolest spot on our trip. While we were there we took a trip to Elk Knob State Park where again I was pleasantly surprised by the small trail that we hiked and how well it was maintained. On our way back to New River State Park, we stopped at Mount Jefferson Recreation Area at one of the lookouts overlooking Jefferson, North Carolina. I can easily say that this was my favorite leg of this trip with cooler temps, and weather matters when you're camping.

The third leg of our trip started out not so good. We actually left on time, filled our trailer up with water, and were on our way. But the fog was going to be a problem. We were scheduled to drive the Blue Ridge

Parkway to the Aquaduct by Grandfather Mountain State Park. But when we got up on the Parkway, it was fogged in and we drove for about 20 minutes on winding, foggy roads with no views. So we canned that part of the trip and went straight to Lake Norman State Park where we were scheduled to be for two nights. We had a nice spot but the temp was hot, hot. We had no electric hookup so no A/C, but we did have a battery-powered fan that we ran off of our RV that helped a little. We did a 2.5-mile hike on the morning of the first day and saw lots of deer. The lake was pretty, but it was hot. We drove into Statesville to cool off in the car and went to Walmart and got some supplies and water. Back at our trailer we did have lots of TV channels on our TV, so we could do that and we had a pretty good cell signal.

The last leg of our trip was to Morrow Mountain State Park. This is a park that we had visited and camped at in the past and had fond memories of. We were scheduled to be here only one night. But the difference was that when we visited before it was in cooler weather. When we arrived at Morrow Mountain, the heat index was 105 and very hot and sticky. The campground was half empty. When we arrived we partly set up, as we were only going to be there one night, and tried to stay cool. It was too hot to hike and even Forrest got under the trailer to try to hide from the heat. After a few hours of this, my wife and I figured that we were only three hours from home and A/C,  so we decided to leave and go home. So we packed up all of our stuff and headed home. This was maybe the best decision that we made because the extra day of rest before going to work was really needed.

So that's how we went to nine state parks in one week. We had a good time and enjoyed the sites. I have visited 25 parks so far and have 9 more to go.  It will take me four or five three-day weekends to reach the parks that I haven't gotten to, but hopefully I'll meet my goal. Please go out and visit your local state park. You might be surprised like I was of all the things there to do. So until next week, get out and shoot!