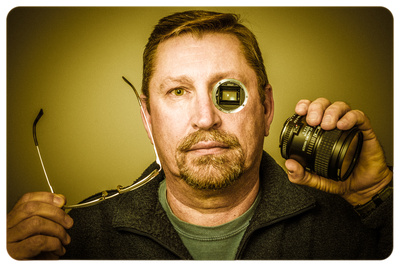 Hey Everyone!  What a title.  I thought of this subject while at my photography club's meeting the other night.  We were going over the next year's activities, and I saw composite photography as one of the topics and hoped that they didn't want me to teach it because I've just done a few of them.  So then I started thinking of a title, "Composite Photography/Fake News."  What I wanted you to think about is do you think that composite photography (taking two or more photos and merging them in Photoshop) is art or just Fake News?  Are you a purest?  Do you think that no photo should be manipulated like this, or do you think that making an image out of many photos is art?  I'm sure there are some strong arguments on both sides.  On one hand, if you're a photo journalist or a sports photographer, the answer may be, yes, it is fake and not allowed. 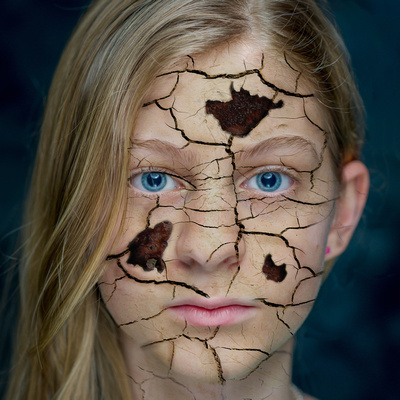 And I can understand that in those circumstances.  But for the 99% of hobby and enthusiast photographers that most of us are, I think it is another way to show our creativity.  I am by no means an expert at composite photography.  But I have dabbled in it a little, and it is very challenging.  For those who don't know, a few years back I was between jobs for quite a few months, so I was at home with a lot of time but with no money.  (I never seem to have enough time and money at the same time. I usually have one or the other.)  So I decided to learn some Photoshop.  I followed tutorials on YouTube, starting small and working my way up to more elaborate composites, still following step by step.  I even inserted some of my own photographs of myself in some of the photos.  Then I started making some of my own with all the photos that I had.  Maybe replacing a sky, inserting birds or a plane in the photo.  Maybe adding a milky way into the shot when there wasn't one.  When I post those photos, I always say that they are composites and try not to say they were originals.  So in my mind 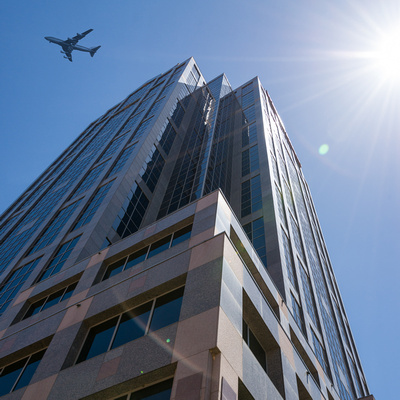 compositing is an art in itself.  I think a photograph like a landscape isn't journalism.  I think it should try to convey the feeling that you saw when you were there, and if a little compositing helps to do that, I'm all for it.

Composite photography can be as simple or as complex as you want it to be.  Simple composites could be maybe adding a bird to the sky or changing the sky altogether.  Maybe you had a blue bird on a sunny day and you wanted a moody, cloudy sky.  You could take one sky out and replace it with another.  Maybe you wanted to insert people into the photo.  Or maybe you're a portrait photographer and you're shooting a group photo and one person has their eyes closed.  You can composite their head from another photo where the eyes were open.  Maybe you have a person who wears glasses and you take one photo with and one without glasses; then you can composite the eyes into the frames of the glasses to get rid of glare that was in them so it looks like a perfect lit shot with no glare.  But that's just simple stuff.  You can create completely different worlds with composite 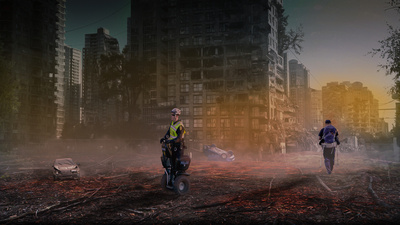 photography by combining many photographs and parts of photographs from different sources.  I have one photo here where I did that.  The photo looks like there was a war zone.  I took the buildings from a photo of bombed out buildings in the Middle East, a couple of wrecked cars, a cop on a Segway from a Christmas Parade, and a photo of me hiking.  So in the photo here it looks like I'm hiking through a futuristic war zone.  This photo took many hours of work and thought, but it turned out pretty good, I think.

There are some things to remember when compositing. Light matters.  The direction and the intensity of it.  It should be the same throughout the whole photo. 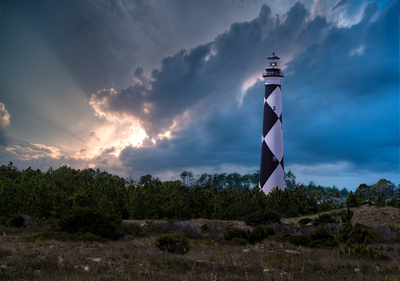 You have to be mindful of shadows and that they all go the correct way and are where they should be.  You should pay attention to edges of the parts of photos that you're bringing in and try to blend them so they don't look sharp and cut out but smooth, like when you're looking at a lot of objects.  Things should look fairly natural.  All of this is very hard to do, especially if you're struggling with the tools of Photoshop.  That's where I struggle the most.  I can see the photo in my mind's eye but struggle with Photoshop.  The only way to stay good at Photoshop is to do it a lot, which I don't.  So when I start to do something in Photoshop, I have to relearn how to use and do things, and that takes up most of my time and everyone else's, I guess.  If you had a good command of all the tools and how to's in Photoshop, it might not be so difficult to do these composites, and there would be a lot more of them I bet.  I have put some examples of some composites that I have done with the blog. 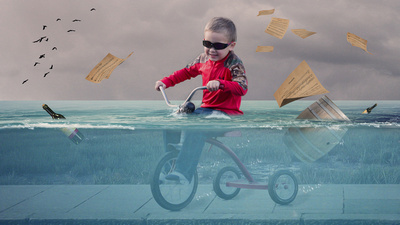 If you want to learn and follow step by step with a tutorial, go to YouTube and type in "photoshop composite" and there will be many videos of composites being made.  Most of them don't have any talking, but you can go step by step and stop and start and rewind the videos as you go until you have a completed image. After you do a couple of these, it will become easier and you can start making your own.  Then when you go shooting you can look for cool things to shoot that you can composite later.  Maybe skies or textures or all kinds of things.  So until next time, stay creative and keep shooting!