iPad Mini for Photos and Camping? 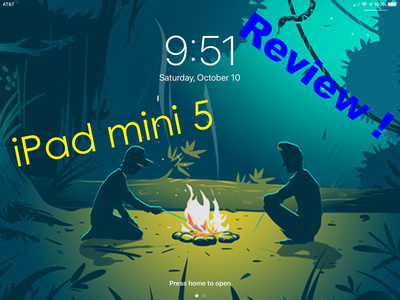 Hey, everyone! I hope everyone is healthy and safe. Today I want to talk about something new that I have added to my camera bag and camping backpack. It's the iPad Mini. I have been looking for something that I could use on the go to edit photos, use for navigation, and of course, consume media. Now, of course, everyone has a phone in their pocket, and they are great but small. Our phones are also doing a lot of things like storing maps and photos, and this really bogs them down and fills them up.  I needed something that could be used 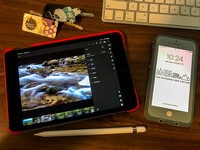 for photo editing on the go and something that I could also use for map storage that would not fill up my phone. I have an iPad Pro that is provided by my employer, and it works great for doing all of these things; however, with the attached cover and keyboard, it weighs more than my MacBook Air that I use when I go on trips. I am getting older, and weight in my pack matters, especially with camera gear weighing it down. I have an older iPad (not sure what version it is) that is so old that the operating system can't be upgraded, and it will not run the programs that I want to run on the iPad like Lightroom or Gaia GPS, a mapping program. I needed something new, so 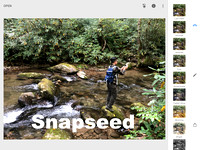 I decided on the iPad Mini. It is small in form with a 7.9 inch screen. It is also lightweight, maybe twice the weight of my iPhone. I am heavily invested in the Apple ecosystem, so it was the choice for me. There are some Android choices that I could have gone to that were cheaper, but I'm an Apple guy and wanted to stick with what I knew. One of the features I like so much about my work iPad Pro is that it is cellular + Wifi.  This means that almost anywhere I go I will have the internet at my fingertips.  It also means that it has a GPS chip that I can use for maps when I'm camping or off-grid. I also wanted as much storage as I

could get to store maps, movies, and things like that. I do like watching a good movie while I'm snug as a bug in my hammock. So I opted for the largest storage that is available for the iPad, which is 256 gig of storage. So how will I use this big, bad little iPad?

Let's talk photography first. The iPad Mini will never be my main way of editing photographs. That will always be my 27" iMac at home. But for those on-the-go "let's edit this one and post to Instagram or Facebook" moments, the iPad Mini will do nicely.  It's small enough that I can carry it easily with any photo bag 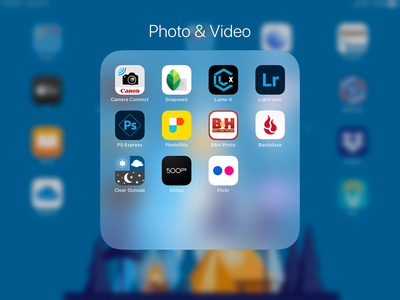 I choose, from my Shimodo backpack that I use for doing landscape photography when I'm hiking to my over-the-shoulder Mountainsmith bag that I use for street photography, the bag I like to call my purse. It will fit in either of these bags. It's perfect for a morning walk around a new town, stopping at a coffee shop, or sitting on a park bench and transferring a photo from my camera using the wifi and doing a quick edit in Lightroom. Sure, I could do this on my phone, but it's much easier on a larger screen. Another advantage to the iPad Mini is that I can use my Apple pencil and make precise edits that would be hard just using my finger. I can also just jot down a note or draw something, that is if I were talented enough to draw. LOL. The iPad Mini is also just the right size to share photographs with people. If you're like me, I have my winners from Lightroom Classic synced with my mobile devices via the Cloud. They are all on my phone and now my iPad Mini. So that's the photography part of the iPad Mini. What about camping and hiking?

When camping or hiking, one of the most important things to do is, as the Scouts say, "Be prepared." And one of the most important ways to be prepared for hiking is to have a map. I use Gaia GPS, which is a mapping program that uses all of the known nationally provided maps, and you can layer them to fit your needs. If you're looking for trails, it can find the trails for you. If you're looking for forest service roads, it can find those also. It can also give you all of the topographical areas of a place you're going to. It's a big, powerful program that will allow you to plan and route your trips in advance. The trouble is when you lose the internet or it quits working, unless you download online maps and use some sort of GPS, whether it's an external GPS like a Garmin or the internal one like what is on the iPad Mini cellular version. When you have the GPS and the downloaded maps, then you can see where you are in realtime. I was going to get a WiFi-only version of the 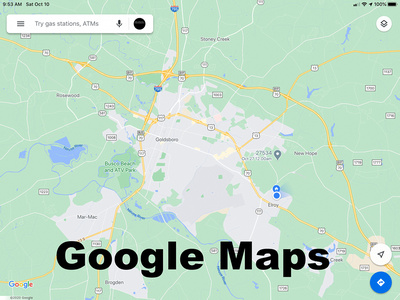 iPad Mini that would have been cheaper, but the GPS with Bluetooth capabilities would have been between 100 and 400 dollars depending on what I got, and then I would have two things to worry about - losing it and keeping it charged up with fresh batteries. So I opted for the cellular version that comes with a GPS chip. I have gone ahead and added the iPad Mini to my cellular plan at less than 20 bucks a month for unlimited data, but I could still have used the GPS part of it without activating the cellular portion of the iPad. Like I said before, it is also great for media consumption, so I have some movies, TV shows, and podcasts downloaded to the iPad in case I get bored at the campsite and don't have cellular reception. If I do have cell reception, I can watch regular TV, Netflix, or any other type of media by camp firelight. I can also edit photos while backpacking.

Here are a few specs of the iPad Mini version 5.  The screen is a 7.9-inch retina display with a resolution of over 330 ppl. So it's sharp! You can use the Apple pencil, but only the first version of the pencil. It works great and is cheaper than the newer versions. It is rated at a 10-hour battery life, which is a long time using this without a charge. It can be either WiFi only or WiFi+cellular. With the cellular version, a GPS chip is included. Storage capacity is either 64 gigabytes or 256 gigabytes, nothing in between. It has the A12 Bionic micro-processing chip, so it is very fast and snappy.

The iPad Mini is sometimes referred to as the iPad Pro Mini because it can do just about anything that the iPad Pro can do.  But because of its size, it's just called the iPad Mini. It's a great little device that I think will enhance my photography and camping experience, and I highly recommend it. So until next week, be creative, explore, and get outside and shoot!